Answer: In order to establish a business in France, does a foreign company have to systematically create a subsidiary company? In other words, can we find solutions more flexible, less expensive?   A simple registration towards social bodies to hire staff, or  a liaison office, or a branch. The answer to this question depends not only on the means that will be deployed in France. If in particular, the foreign company creates a liaison office, it has to be very strict concerning its operations.

If the foreign company simply wishes to hire one staff aimed at having contacts, collecting information, giving information for the mother company’s account, or assuming the advertising of it, it can consider two options: the first is to simply get a SIRET number to be registered towards social bodies. The second consist in creating a liaison office. To decide which the most suitable option is between a simple SIRET number and a liaison office – click here.

Consequently, the employees must never sign any order form in both these aforementioned situations. They have to be signed by the mother company’s representatives in the country of origin.

Concerning fiscal law, the liaison office does not have a literal existence. The charges of the liaison office are in principle deductible from the taxable income of the foreign company in its country of origin. However, if the liaison office has in fact commercial activities (see above), it can be requalified as a permanent establishment. In that case, in order to retrieve the French VAT that has burdened the prices of goods and services bought in France, the foreign company must appoint a fiscal representative in France. Such an appointement is not required if company is situated in a EU-Country.

…Or a branch or a subsidiary

If the activity within France is commercial, the mother company has to create a new branch. In order to do so, it has to register to the RCS in the 15 days following its opening, and appoint a representative for France. If the representative is not an EU citizen, he must, most of the time acquire a trader’s card (carte de commerçant), which is an authorization to do trade. Finally, every year, the foreign company has to file the annual accounts translated by a sworn translator to the aforementioned RCS.

Consequently, the branch is subject to corporate tax according to the common law rate. To determine its fiscal income, the accounting income needs to be restated, mainly to take into account that the branch is only an extension of the foreign company, which cannot be considered as a different legal entity. Moreover, the VAT of importation from countries belonging to the EU is not due. However, it must be paid for importation from other countries. For this purpose, the company has to appoint a fiscal representative.

Finally, the company can create a subsidiary company; which is detached from the mother company. The income is taxed in France (see Milestones when starting a business in France).

The aforementioned writings may be summarized as follows: 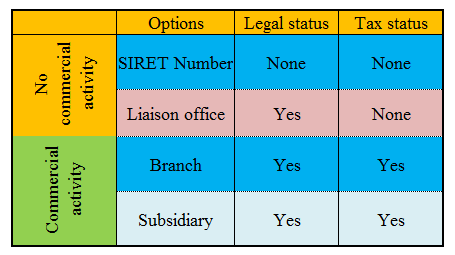 Accounting in France
Scroll to top