Is Firing in France as difficult as it is said? You have recently hired an employee using a permanent contract. Unfortunately, her/his trial period is over and her/his achievements are below expectations.  How can you separate at minimum costs to the company?  Providing you with the first tips how to deal with the issue requires to prepare the legal background before dealing with the stake and finally the behaviour to use.

There are legally 3 ways to end a relationship with an employee.

Except in the case of an employee who has committed a serious fault (faute grave), redundancy is the best option , and especially if the employee has been with the company for a long time. In the eyes of the law, the damages and severance pay for redundancy depend on how long the employee has worked for the company. If they have been there for less than a year, the damages will amount to 1-2 months’ pay. However, after 2 years of service these damages can rise to 5 or 6 months of salary. Severance pay  for the employee is small.

To avoid the unfortunate consequences for the employer of a court case, the parties can come to a settlement immediately following a redundancy. This agreement removes any possibility of the employee taking legal action thanks to the payment of a negotiated amount of severance pay, which is often inferior to what an employment tribunal would award.

Finally, since 2010 there has been the option of the ‘rupture conventionnelle’, through which the parties sign a mutual termination agreement to cease contractual relations. The main advantage of the ‘rupture conventionnelle’ is that it is a lot less costly than a settlement. But the other side of the coin is that it provides a lot less security for the employer. The employee still has the right to bring the employer before an industrial tribunal, arguing that the employer forced his or her hand.

Also note it is strongly recommended not to negotiate a mutual termination agreement if the employee a protected status (such as trade-union representatives, etc.).

The legal bakground of Firing in France can be summarized as follows: 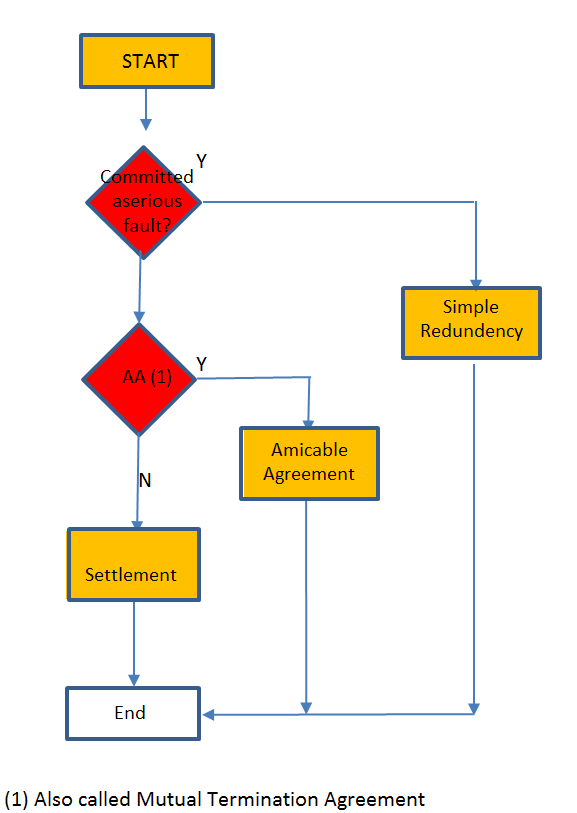 Firing In France -Laying off in France

Risk in such a legal context

The main risk is to keep on the employee, hoping that he will make progress and overcome his shortcomings. In reality, if at the end of a year the employer’s efforts are in vain he will probably we forced to pay damages and severance pay that is a lot larger while he will have spent a lot of energy and time in trying to improve the employee’s performance. And the employee will be just as frustrated.

So the essential question is to know if the employee is has it in him to improve – in short, if he will be better today than tomorrow.

In consequence, it is important when supervising an employee to understand the kinds of errors they commit. And even though they admitted to making them, it is still not enough if they reoffend .

What to do in this case?

Push him into a corner by applying the strategy of ICHIKWA – in other words, until the employee reveals the deep nature of his error. Because this pressure should result in one of the 4 following responses: I don’t care (or I am not motivated), I don’t want to do it, I don’t know how to do it, I have a serious personal problem (objectivity).

This will allow you to broach the subject of their leaving and how that may be done: ‘rupture conventionnelle’ (if he says he is not motivated) or redundancy followed by a settlement.

Collaborative Tax Credit (CICO) : how to take advantage of it?
Scroll to top